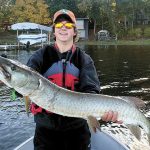 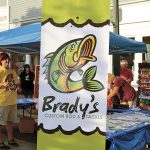 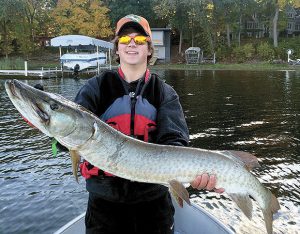 Since he was 5 years old, Brady Ballis has liked to fish.

When he was 15, his parents, Tom and Mollie, gave him an inline spinner-making kit for Christmas and in Ballis’ words, making his own lures “took off from there.”

Now 18, Ballis spends free evenings at home in White Bear modifying and painting lures and building custom rods for resale. Many of the lures are tied with shiny tinsel called flashabou, made by a Stillwater fishing company where he also happens to work.

The product gives his lures the appearance of live bait in the water, Ballis said and he uses it on all his muskie lures.

Speaking of muskies, Ballis likes to tell the story of the whopper he caught late last summer:

“It was early September, my buddy Tyler and I were just going out for fun. It was going to be the last time we were going fishing on White Bear Lake. After 30 or 45 minutes of fishing I hooked the fish. At first I thought it was only a weed because it wasn’t fighting at all. Then all of a sudden the weed started to move sideways. I was only using a spinning reel with 15-pound test monofilament.

“It started fighting a little bit and we had still had no clue what it was. Then all of a sudden we saw the beast and it saw us and took off. It smoked my drag on the spinning reel and took off an easy 100 feet of line. I was in my little 14-foot alumna craft and this fish was so big it actually was dragging us across the lake. Tyler and I fought it for at least 20 minutes. I would reel it in and then it would swim back out and take all of the line out again. Finally we got it in and luckily Tyler was there to help net it because I wouldn’t have caught the fish without him. Our net was way too small and only the head fit. So he got the head in the net and I had to grab the tail and flop it in the boat. It was 50 inches and just under 40 pounds.”

Last month, the budding entrepreneur rented a booth at Marketfest to peddle his lures and custom fishing rods. Sales were good, enough to cover his costs plus a little extra, Ballis said. His marketing efforts are supported by his mom, who is a graphic designer and designed his logo; and his dad, who pitches the tackle to his firefighter buddies. Tom Ballis serves dual roles as a Stillwater firefighter and first assistant district chief at station No. 2 in White Bear Lake. 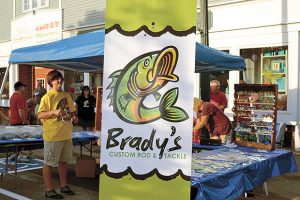 “My parents help me make connections,” Ballis said. “The guys at the Stillwater fire station are constantly asking for lures. One guy especially loves the spinner baits. He caught half a dozen pike with the biggest one 42 inches. It actually straightened the bait because he caught so many.”

Sales mostly are word of mouth at this point. He’s not quite ready for online sales through a website but his goal is to “keep growing and show people what I make.”

Eventually the young fisherman hopes to manufacture his own tackle full time. Ballis’ dream is to own a store selling his lures and custom rods with classes for tying flies and building rods.

If he’s not making lures, Ballis is usually in a boat fishing. He graduated from White Bear Area High School in June and plans to attend Hamline University this fall to study business. He played Junior Gold hockey and was a member of the trapshooting team in high school.

Does he have a favorite fish to catch? “I love catching them all,” Ballis said. He usually fishes in White Bear Lake, which the avid fisherman said is on track to being one of the best muskie lakes in the state thanks to DNR stocking efforts.

Lure prices range from $1.25 for hand-tied jigs to $5 spinner baits. Custom rods range from $100 to $600 depending on material and desired sensitivity.

For now, sales are not making him rich. Any profits are usually used to buy another mold to make another lure. “As long as I can sell a lure here and there to someone, I’m happy,” he noted.

Catching fish on his own tackle is quite a thrill, too.

Especially a fish like that muskie: “It’s a different feeling to catch all these fish on a lure and a rod that you made yourself,” Ballis said.