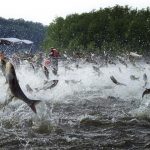 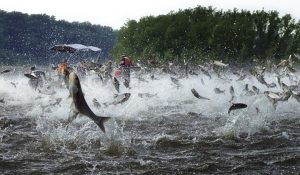 In 1973, a type of carp was imported from Asia with the goal of ridding U.S. ponds of unwanted parasites and improving the quality of the water. It worked, and then some.

By the early 1980s, Asian carp started to appear in the Mississippi River and other large bodies of water. Decades later, millions of voracious, filter-feeding Asian carp are plaguing the Missouri River and its tributaries.

“It’s not even a hyperbole to call it an ecological disaster,” said Tory Mason, fisheries management biologist with the Missouri Department of Conservation in St. Joseph. “They’ve taken over a lot of habitats that native species in our big rivers like to occupy.”

The fish are known to damage or destroy ecosystems because of what they were first brought to the U.S. to eat: plankton and algae.

“[They’re] limiting those native fishes’ food source,” said Tyler Ruoff, a resource scientist with the Department of Conservation. “That chain effect is going to go down the line and affect our fisheries.”

And it has. The meddlesome carp are forcing native fish to compete for food and swimming space.

“Asian carp make up at least 50 percent of the total biomass found in the Missouri River,” Ruoff said. “They’ve been prolific.”

Adult Asian carp can eat up to 20 percent of their body weight on plankton in a single day, and the four main subsets of Asian carp — bighead, black, grass and silver carp — can weigh anywhere between 20 to more than 100 pounds. On top of that, female Asian carp will lay hundreds of thousands of eggs each time they spawn, which can be several times a year.

Outside of harming ecosystems, some of the Asian carp pose a direct threat to humans who skim the waters above on watercraft.

“I’ve personally been hit dozens of times,” Mason said, referring to the jumping tendencies of the silver carp. “I’ve heard of broken bones and ligament damage.”

Mason said the most dangerous encounters between boaters and Asian carp come on oxbow lakes, which are shallow, river-made bodies of water like Lake Contrary and Little Big Lake.

“When you’re on a jet ski, the collisions aren’t good,” he said.

“Short of a disease wiping them out, we really don’t have an answer yet, which is the scary part,” Mason said.

One option, however, takes into consideration the popularity of the fish in other countries.

A company called American Meixi Fishing Industry is exporting the fish, using the same waters in which they have invaded. The Grafton, Illinois, business flash freezes thousands of pounds of Asian carp daily, then uses river and ocean freight to ship them back to their land (or waters) of origin.

Back up the Missouri River to St. Joseph, fishermen have started to capture the carp to use as bait for more enticing, native fish, like catfish and gar.

It’s the circle of life.