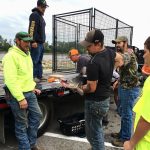 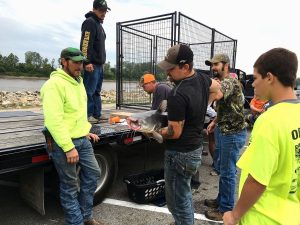 A local teen raised nearly $3,000 for families of children with cancer over the weekend.

Benton High School student Joe Ford, 14, was diagnosed with Hodgkin’s lymphoma when he was 12 years old. He beat the cancer, but noticed that the people around him needed help.

He organized the Casting Out Cancer fishing tournament last year as a way to raise money for things that families may need.

“I kind of thought of the whole fishing tournament idea because I had cancer, and I saw the toll that it took on my mom and family,” Joe said.

This year’s tournament was an overnight fishing event that ran from Friday to Sunday.

Joe’s mother, Monica Ford, said that this year’s tournament was much larger than the inaugural one.

“We had three boats last year, and we had 20 this year. So, it was amazing. I was overwhelmed with the response,” Ford said.

The $1,500 raised from sign-ups went toward a charity program that Joe is starting that will provide a basket of helpful items for families that have children suffering from cancer.

“I (am) starting a nonprofit. It’s called Door 2 Floor, and it’s going to contain a basket of gas gift cards, food gift cards and things like that,” Joe said.

In addition to sign-up fees, there also was a silent auction. Ford said the final numbers aren’t counted up, but she expects this year’s tournament to have raised at least $2,000 and is hopeful that it will be closer to $3,000.

Collier said they were lucky because it was the only fish they caught.

“We were excited when we got the fish in the boat. We didn’t have any other bites though, so we didn’t know what we were coming into,” Collier said.

Roberts said the fish made his night.

“It was a tough bite last night. So 64 pounds on a tough bite is, you know, you have a pretty good night,” Roberts said.

The couple enjoys fishing and found out about the event on Facebook. They wanted to help Joe with his “awesome” idea.

“I think that’s great,” Collier said. “As a teacher, I love it when kids take that initiative and go for something they believe in. I think that’s awesome.”

Joe’s mother hopes that the tournament continues to grow and said it will be held again next year. She was filled with emotion over how many people turned out to the tournament this year.

“It just, it’s overwhelming, it really is. I don’t even, I can’t even put into words how awesome it is. This community is just awesome anyway,” Ford said.